Include the lines, “So it turns out unicorns are actually smart, territorial and dangerous.” 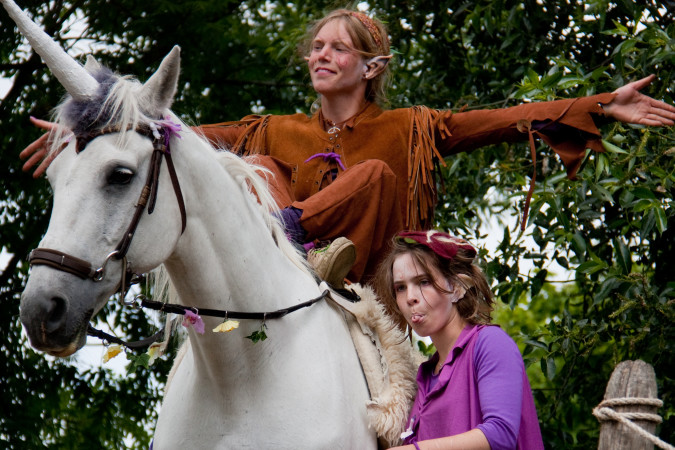 For my 18th birthday, I got a unicorn. In less than a hour, the unicorn, who’s name I haven’t chosen yet, had already tore up the yard and my, once beautiful, garden. “Trouble.”I decided. “That’s your name.”

I took Trouble for a walk so he could cool off. His strong legs walked along beside me. When he went ahead of me, I struggled to catch up. When we reached the border between my coven’s territory I urged Trouble to turn around so we wouldn’t get in trouble with our rivalry coven, the Aries Coven. As the Libra Coven, we’re opposites.

“Come on Trouble!” I pushed him. He wouldn’t budge. He twitched his head around, then turned to the left, then to the right. Suddenly 5 members of the Aries Coven came out of the woods. 3 of them had fire balls in their hands, another was chanting a protection spell while the other was chanting a strengthening spell. I couldn’t beat them, I was outnumbered.

I turned around to run only to find 2 more witches waiting for me. “We’re in trouble, Trouble.” I whispered. He gave me a side glance. And nodded. He actually nodded. I frowned in confusion. Did he understand me?

He started to shuffle his hooves around and breathing very loudly of his nose, as if he were a bull.

It happened in a blur. Trouble surged forward and attacked the front row, knowing I could take on the 2 witches behind us. When I knocked them out with an unconscious spell, I swiveled around to find that Trouble had scared off the other witches into their territory. Then, he shoved the other 2 bodies onto their side. After that I put a barrier around my coven’s territory. We walked home, and Trouble went into his stable without my help. So it turns out unicorns are actually smart, territorial and dangerous.