You are about to go on a quest. This is your only mode of transportation. Tell the story. 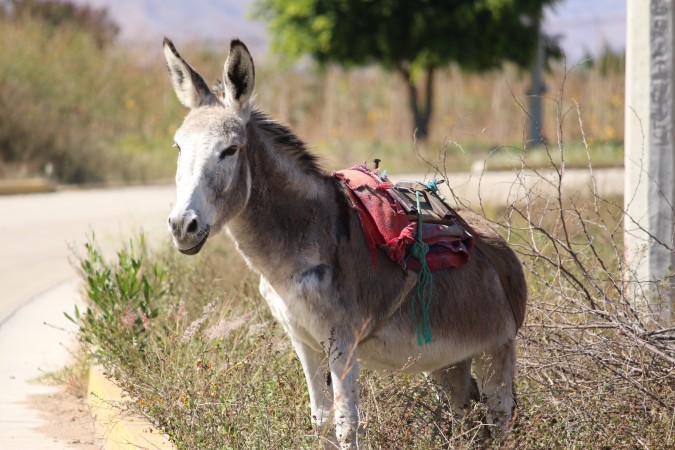 Today was the day, I thought as I was driving to the place that I would start my adventure. As I start walking to the house where they would give me my mode of transportation, they brought out a donkey! “A DONKEY?!” I yelled as I saw the donkey, I thought I was a part of an elite task force, codename Eagle. Eagle was a task force that was put with the most difficult tasks in the whole entire military. When I saw the donkey I told them, “Why are u giving me a donkey? I see a armored car inside!” they replied with, “You have to, all these cars and planes have technology in them, their radars can scan for technology and they will find you, but if you have a donkey.” I finally understood what they were talking about. I got on the donkey and started my mission, my mission was to infiltrate a enemy base and steal any information possible. The donkey had to take a break 4 times during the trip, each were very long, I had to stand the the scorching sun, it was about 100 million degrees outside with all my equipment. As I got close  I saw the small building, it was already night and i was told not to turn on any electronics like night vision goggles. So I came in, put the guard in a sleeper hold and knocked him out like i’ve done a thousand times. I saw the computer, I plugged my flash drive in and started to transfer data, but as soon as I put it in, soldiers barged in and held me at gunpoint and told me to stand up. The data transfer was complete, but I had a whole different problem to worry about. There were 2 soldiers holding me at gunpoint, I still have all my equipment I thought. I quickly took a stun grenade and stunned them both, I knocked them both out with just a simple tap to the head with the butt of my pistol. I took the data and made a run for it, armored cars were coming from all sides, they were firing at me. I returned fire as I retreated to the donkey, there was no way I could escape on that donkey. I got to the donkey and they were hot on my trail, I got on and told it to go, all of a sudden there was a bolt of energy and I went flying as the donkey went full speed, the donkey ran into tight creases to lose the people chasing me, we got away in a tight canyon, I called for a helicopter to get us out, but as I got off the donkey I saw that it was shot in the heart. The donkey sacrificed itself to save me. It just played there still on the floor not moving, I felt for it’s pulse, nothing. The helicopter was here, I got on and started crying as we left the donkey there. Now I am thankful for any mode of  transportation at all, if it wasn’t for the donkey, I would’ve been dead.