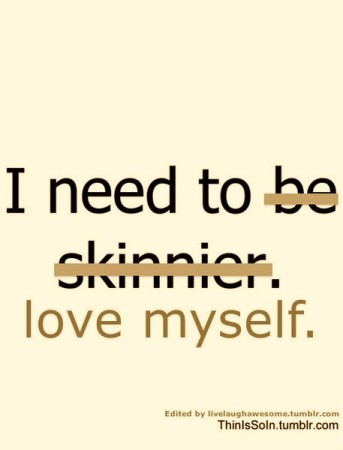 Throughout this assignment, I have focused on the havoc that society and social media reeks on the population. Popular trends such as selfies, plastic surgery, Photoshop, and thinspo are all dangerously harmful to one’s subconscious and self-image.(AAFPRS 1) (Huffington 2) I have learned so much from my research that it is crazy to think I was so clueless in the beginning and not as self educated as I am now. When I first started on this project I knew that these things were destructive yet I did not know to what extent. Some people take these ideals of perfection and starve themselves till they are put in extensive care, others go under a knife for the sake of beauty.(Kay 2) (AAFPRS 1) Is it worth it? When you have finally reached your goal weight, standing in front of the mirror admiring your work yet what you really see is your dying body on its last leg, about to give out, and for what? To be beautiful? I’m telling you now that there will never be a limit once you start.(Kay 3) There will always be one more pound to lose, one more area that needs to be fixed. The same with plastic surgery, it’s unlimited. Just look at celebrities. Most you know of probably have or have had a plastic surgery addiction.(BDDFoundation 1) No one will ever be content with their appearance, it’s a fact.(AAFPRS 1) Every individual will always see their flaws magnified to themselves, but society needs to learn to love them. Instead of setting a standard of beauty, why not embrace it ? Lately there have been some campaigns that have tried to achieve this goal,  such as the Dove’s campaign Real Beauty or Victoria Secret’s Love Your Body Campaign. I fully support this movement. Each campaign seems to be trying to communicate a sense of self worth to the populous. Though I believe that they should also include men in this. I personally have not seen one campaign feature men. Males are just as susceptible to the same diseases and the same social media trends as females.(Conger 1) Therefore, they also need the same support and the same prevention methods put into place. I sternly believe that if the school systems were to implement a program such as the D.A.R.E  or sex ed but instead gear the studies toward mental illnesses that hinder the body like anorexia and promote body positivity, it could make a difference in the world as we know it. Body Dysmorphia Disorder and anorexia both hide in the shadows.(BDDFoundation 1) It is about time we address this issue and help put an end to society shaming anyone who is being open to the subject yet society is still promoting the illness to people of all ages and genders, which is extremely hypocritical. (AAFPRS 2) I can not stress this enough, if I have learned anything at all during this assignment, it would be that these things affect everyone. Literally these problems are globally disfiguring. It does not matter if you are Caucasian, African American. Or Asian. It does not matter if you are male, female or transgender. (Conger 1) It also does not matter if you are homosexual, heterosexual, bisexual or asexual. No matter who you are, what your are or any circumstance that happens defines you, the dreadful truth is you are a victim to society’s ideals and social media’s bias on perfectionism. I hope that in the future the population can band together to help support those who become victims of these serious epidemics and help them cope with recovery. “We the People” have the power to change these horrid views and overall promote a thriving, self-accepting community. Everyone just has to commit to trying.

In addition I’d like to add this video which portrays Famous pop star Beyonce making a loud statement on Society’s views: https://www.youtube.com/watch?v=LXXQLa-5n5w