Include these lines, “A gargoyle is the least of your concerns.” Majik 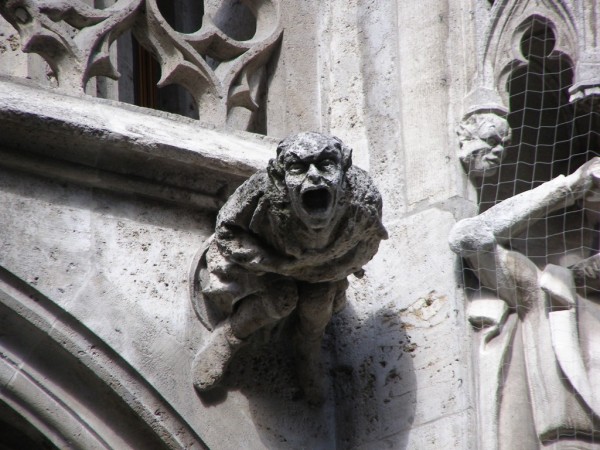 I can’t believe I was drawn into this. After such a normal day, then some guy comes by and I get sucked into a world of magical creatures and Majiks.

So today started like any normal Saturday, I had a stack of like two or three books to read over the weekend. You know normal stuff. It was a nice day, sunny, warm, and mom said I had to be outside, so I took my book and sat in the grass and read. After about half an hour I looked up from my book. I noticed some weird things. It seemed like a bird was hovering above me, not moving.

I stood up and saw everything but me was frozen even time itself seemed to be stopped. Then I noticed some movement in the woods nearby. I got a little worried when I saw that. Then a boy about my age approached me.

I was freaked out because the bird still wasn’t moving, so I froze. It was my natural three F’s response. I saw in the sun that the boy had sandy colored hair, and bright blue eyes. The eyes stood out the most. He came closer to my and I just held my breath. Then he bent down, feet in front of me, and picked up my book.

THAT WAS IT!!! NO ONE TOUCHED MY BOOKS WITHOUT MY PERMISSION! I unfroze and ripped the book out of his hands, ignoring the shocked look on his face.

“NO ONE TOUCHES MY BOOKS!!!” I screamed at him so loud I thought my mom would come out and yell at me.

“Wait a second,” he said in a British accent. “You’re not frozen?”

“Must be Majik,” he said to himself.

“Sorry, what did you say I have magic?” I asked.

“Like in your book? Harry Potter? No, not in that way. You are Majik.”

“And how do you know that?”

“Simple. Because your not frozen.”

Okay, Okay. I admit it I was confused. Imagine going from reading a book to standing in a frozen world and having some British kid say your Majikal. But without any proof to back me up the other way I believed him.

Okay. That was kind of hard to believe. Period. I had no proof.

“And what proof do you have of that?” I asked him.

“That!” he said pointing to the sky.

I looked up and saw a flying creature. It were gray and ugly. I made my decision.

“Alright. You convinced me. What do we do?” I asked urgently.

“Just stay there.” he said grabbing something from his pocket. It was an orange dust. He hurriedly sprinkled it in a circle then tore a small vial full of clear liquid on the orange circle. The circle then lit up and formed a dome.

It looked like we would be in here for a while, so I started asking questions. “What is that thing?’ I asked gesturing up at the gray thing.

“Yeah, only alive and trying to kill US!”

“I’m, AAAAIIIIIEEE!!!” I screamed because the gargoyle had broken thru the shield thing.

Leo grabbed a bit of the orange dust and holding it in his hand said, “AWAY!”

Then this voice came out of nowhere and said “YOU ARE NO MATCH FOR ME, CHOSEN ONE!”

After this all was quiet. I stared into the sky where the gargoyle was and noticed that the bird was still frozen in place.

“DARK!” Leo yelled at the sky. “YOU ARE BEATEN! YOU WILL NEVER SUCCEED! WE HAVE WON!”

“That was the Dark Majikal. He’s after you.”

“I’ll explain on the way, and believe me if Dark is right, a gargoyle is the least of your concerns.”

Leo started walking off and I fallowed. I did not want to be left alone after that experience. We walked into the woods where he started explaining. “There was this prophesy,” he said. “That was made along time ago, it stated basically that the Chosen One would be one that no one knew was majik and they would move during a Freeze. Which by the way you just did.”

“Because,” Leo said, “the Chosen One is supposed to destroy him.”

Okay so just like every book and movie I’ve read and seen. Destroy the bad guy. Piece of cake, I think. Then my courage suddenly kicks in.

“Are you crazy?” Leo asked. “We have been trying to defeat him for years and you think you can do it in a day?”

He changed the subject suddenly. “What is your name again?” he asked.

“You still want to face Dark today? You are crazier than I thought.”

“I have been called many things, crazy is in the top three. Now teach me majik, Leo,” I said.

“Fine, fine. I’ll teach you the basics, but only the basics. You need someone more advanced to teach you any more.”

I agreed, reluctantly. Leo gave me a bag of the orange powder and taught me some self-defense majiks and a few other basic things. I got caught on pretty quick. After a few majiks he would tell me what it was called and I would be doing it before he told me what to do. Finally we got to what I wanted: transportation. “So,” I said. “If I wanted to go to say, where my grandma is right now, how would I do that?”

“Easy,” Leo answered, ” you just say Take me to and say where you want to go.”

“Okay,” I said a smile growing like a weed on my face. “Like this?  Take me to the DARK MAJIKAL!”

I suddenly saw a bright light, like looking at burning magnesium, (Don’t look at burning magnesium. It hurts.) and everything was silent for a few seconds. I then appeared in a dark room. I saw an old guy who I figured was who Leo had called Dark. Since he was the only person in the room.

Dark was just standing there, back to me. I then heard a small pop and looked at where I heard the sound. Leo was standing right next to me. I was about to whisper something when the dark, menacing voice that I had heard after the gargoyle attack.

The voice said, “Leo, it’s rude to pop in uninvited.” Dark then muttered something and flicked his wrist and Leo flew off, and landed on the wall. Leo tried to run away from the wall but was held fast like he was stuck with glue to the wall.

“Now, Chosen One, I suppose you came to destroy me.” Dark said looking at me with a look that I felt was staring into me trying to control my thoughts, my fears.

“I have seen and read this a thousand time you will fail and I will destroy you,” I said not knowing where the bravado came from.

“Don’t do anything!” Leo screamed at me voice full of fear.

Dark mumbled something and blew on his hand I could see this energy force flying towards me at a thousand miles an hour. I grabbed some of the orange powder and said “ Protect,”

The energy force went flying back at him and he dismissed it with the wave of a hand. He then said “Not bad,” he then gave an evil laugh that will still haunt me to the day I die. Dark mumbled something else and held out his hands and energy came shooting out of them.

Okay, confession time. I don’t remember what happened next, but if you remember Leo is stuck up against the wall at this point and he saw it all, and told me what to write.

I said nothing but just threw my arms up like I was doing jumping-jacks, and then all of the sudden a Majik shield erupts in front of me, spanning the length of the room. The energy that came shooting out of Dark’s hands, was all deflected back at him. It surrounded him, bathing him in a glow of white energy, snaking into a ball electrocuting him inside and out.

Once Dark was no more than ashes my shield fell and I collapsed. The Majikal restraints flew off from Leo and he came rushing towards me as fast as Dark’s first assault. Leo kneels down at my side and then I pass out.

I awoke with a start. WHERE AM I!!! I thought then I sat up with much pain and looked around. I suddenly remembered what had happened earlier. All of the Majik.

“Are you all right?” Leo asked when he saw I was awake.

“Aw man, you still have your since of humor,” Leo said.

Leo looked confused and then I think I saw him smile. His face returned to a slightly scared face. “You know what you just did, right?”

“No, look, simply put, when a Dark Majikal is killed their killer becomes the new Dark Majikal,” Leo told me a look of anguish on his face.

“So what does that mean?” I asked kind of afraid of the answer I would get.

Inspired by this IDEA WRITE YOUR OWN POST ABOUT THIS Read more from Ms. Stading's Class