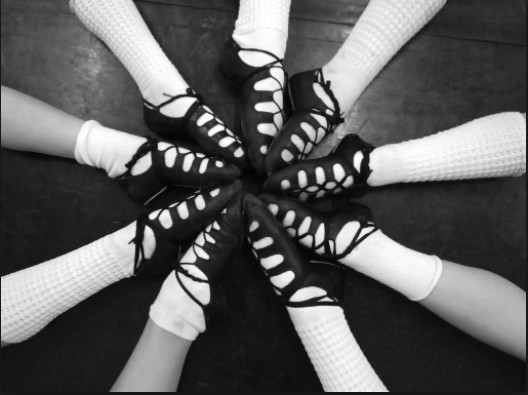 Irish Dance is an art and a sport combined. Those who say that dance is not a sport are ignorant minded. What makes dance different? What defines a sport? I personally define a sport as a competitive activity that requires practice, competition, and hard work. With that definition, how is dance any different. Dance requires sweat and injury as well as hard work just as another sport such as basketball. Dance is an art because it is used as entertainment. Sure, you could say that watching the NFL or NBA is entertainment as well but dance could be on screen, on the streets, as well as in a theater. Dance is a universal language that expresses emotion in more than one way.

Irish Dance was created in the early 1800s. Irish people were known as a very happy group that always loved to dance with no set choreography. The Irish people were invaded and forced to chores such as cooking and cleaning for their invaders. All dancing was banded. If someone were to be caught dancing by a guard who looked through a window, they would either be sent to jail or exiled. This was a harsh life especially since dancing stood for happiness. So, the woman of Ireland band together and choreographed dances that didn’t require the movement of arms so that the guards wouldn’t be able to tell through the windows. Of course, They made their style of dancing to their cultural music including bag pipes, bohdran, and concertinas. This is how Irish dance was founded.

Now, lets discuss the current levels of Irish dance and what it achieves you. Basically, the modern competition of Irish Dance. When you start of Irish dancing, usually 7-12 years old, you start at the level beginner. Once you start competing at a competition called a feis (plural: feisiana) you must receive a gold medal/first place in each of your dances before moving to the next level. Of course, this is simple as a beginner because you only have three dances and they are very basic moves. It becomes harder as you have more dances and the moves increase in difficulty. Once you have received the gold medals, you move on to Advanced Beginner. At this point, your costume has not changed whatsoever. You are in a uniform dress that was assigned by your dance school with no make-up and a simple curly bun wig. After you achieve the medals in advanced beginner, you move on to novice. In novice, you can wear makeup and wear any dress that your school provides. If you want, you can now have a longer wig. After novice, you move onto prizewinner (the level I am currently in). In prizewinner, you can have what is called a solo dress. A solo dress is a dress of your choosing and can have bling if so desired. After prizewinner, you move onto PC or partial champion. Once you reach this level of Irish dance, you have the opportunity to got to the worlds competition. It is usually held in Ireland or Scotland. At any level and age you may go to Oirecahtas (regionals) or Nationals but you have to be in PC to go to worlds. After PC, you join OC or Open Champion. This is the highest level of Irish dance.