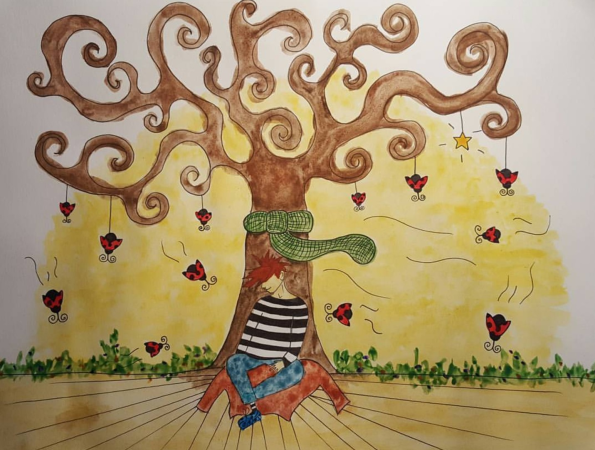 Lolu was a brave little girl and she hated school. She loved to paint with watercolors. Her dad had given her the passion for drawing.

Once, she was at school, and she wanted to find the best watercolor in the world! It was called “The Tears of happiness” by Stars. She knew Salomé was Star’s best friend, so she was the master of the watercolor. She escaped school by the window and walked for miles. It was night time, the stars smiled to her and they become her friends and she continued to walk. In the morning, the stars were no longer instead in the sky, but in Lolu’s head, a bird brought fruits to Lolu. He became her friend as well. In the forest, it was dark, but the stars were here to sing beautiful songs. Lolu fell asleep on the grass. At dawn, she continued to walk until she arrived at some smiling flowers. They told her that she wasn’t far from her destination. She saw a big hut in a tree with a lot of paintings, colors and toys. It was wonderful! A Paradise for children!

She climbed inside. There was Salomé! She wore multicoloured overalls with flowers on them. She was in the process of painting. They become good friend! They drew together without stopping. They ate pasta and listened to happy songs on the accordion. Lolu stayed. She sent letters to her parents. The two girls made many drawings with the magic watercolors of stars.