Life Is Looking Brighter From On The Other Side 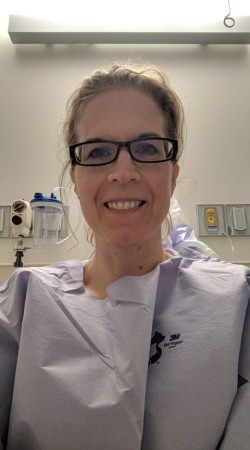 Our brains are very powerful, and they can think a lot of amazing thoughts and come up with dazzling new ideas. They can also take a situation that shouldn’t be that big of a deal and make it seem like it’s the end of the universe. If your brain has ever pulled this stunt on you, I know you’ll connect to this story. It starts on a dark, chilly November morning–Thursday, November 16, to be exact.

Brrrriiiiiinnng! Already? I thought. That can’t be the alarm, yet, is it? Didn’t I JUST fall asleep? I knew the darn phone wasn’t going to stop ringing until I picked it up and told it that I was awake. Usually, my phone and I get along, but today? Grrrrrrr…I didn’t want to go to the hospital, I didn’t want to have surgery, and I really, REALLY didn’t want to get out of bed.

I dug through my comfy clothes drawer and found the perfect pair of wild and crazy leggings that I thought I should wear because they made me smile just looking at them. I was sure some of the nurses would like them, too. After quickly getting dressed and NOT eating breakfast–only because patients having surgery are not allowed to eat anything after midnight the night before a procedure–I quickly climbed into the passenger seat of the van and Mr. Bladow started the drive to the hospital. The windshield wipers scraped back and forth against the thin layer of frost that had built up on the windshield. I’m honestly not sure what I was thinking about during the ride. The thoughts shot across my mind like shooting stars. What would happen? Would this all be okay? Did I make the right decision? Would I ever be able to sing again? Should I have just sucked it up with my slightly defective voice? Would the nurse running my IV do a good job without causing me extra pain?

What seemed like a heartbeat later, we arrived at Froedert Hospital in Milwaukee. Towering buildings rose around us, and each street was marked with which way to turn depending on which part of the hospital you needed. The place is big enough that it feels like it should have its own zip code! There was even a crossing guard helping hospital employees cross the street because there was so much traffic. Mr. Bladow pulled into the hospital’s underground parking area. From my earlier visits, I remembered that each level of the ramp is marked with clever pictures and sounds so that people can remember where they’ve parked. Not a bad idea when there are so many levels in the parking ramp! Today, we parked on the train level, and I was sad to realize that there were no train sounds playing over the sound system. I guess it was up to us to remember where we had parked.

On the third floor of the Center for Advanced Care–just one building in the conglomeration of other buildings on the hospital campus–I checked in and received a black, circular plastic pager that I was told would buzz and light up when the nurse needed me to come to the pre-op area. I barely sat down and that little device was dancing in my hand like an alien spaceship. I approached the waiting room door that swooshed open automatically, and I followed a nurse back to my pre-op holding room. The smell of rubbing alcohol hung in the air. My “room” was a curtained-off area with a bed and a few other pieces of equipment. I was given a very fashionable purple paper hospital gown to change into. While it didn’t fit very well, it had a port on the front where it looked like a hose would fit. I didn’t give that much thought at the time, but it turns out that the port had a very important use that I will explain later.

Mr. Bladow and I visited while the nurse ran my IV without any problem at all. Whew! Much better than the last experience when it took the poor girl who tried four different tries to successfully find a vein. One less thing to feel nervous about. Now, I just wanted to get into the operating room and get this deal over with. Over the next hour or so, a variety of different people came in to introduce themselves. I had no idea it took such a large team of people to perform a vocal surgery. My doctor, his two residents, the anesthesiologist and his assistant, several nurses…they just kept coming. They assured me that they would take great care of me, and I believed them.

Finally, someone added a dose of relaxing medicine to my IV. It made the room feel blurry around me, and instead of feeling scared, I felt like I wanted to laugh. My bed started to move towards the OR. When we entered the double swinging doors, the ceiling looked like what I imagined the ceiling of an alien spacecraft to look like. Large plastic light fixtures and metal devices extending from poles were suspended there. Clanks and clatters of instruments being set up, wheels of carts rolling into position, as well as the buzz of conversation from the medical staff made the room fairly loud. A rubber mask appeared over my mouth and nose, and someone said, “Deep breaths, in and out, in and out…” And then…blackness.

What felt like seconds later, my eyes fluttered open, but the only thing I could focus on were the white ceiling tiles. I had no idea where I was, really. A nurse checked my vitals and told me that I had been asleep for an hour a half. That anesthesia medicine is magic, I tell you, because it did not feel like an hour and half had passed! My pulse monitor beeped steadily in the background. I was still alive, so that was a good sign, but my mouth tasted like I had eaten metal shavings, my throat felt sore, and goosebumps ran up and down my arms.

I tried to answer the nurse’s spoke questions, but I realized that no sound except for a croak would come out. She seemed to understand that I felt cold, so she hooked a hose up to that magic port on my gown that I mentioned earlier and handed me a temperature dial. It turned out that the gown had an electric blanket built right in. Much better! The doctor stopped by to make sure that I was doing okay and reminded me that I should lay low for the first couple of days though the weekend with as little talking as possible, just to let things heal.

About an hour later, I waited while the nurse disconnected the IV, exchanged the warm gown for my street clothes, finished up the rest of my apple juice, and sat in the wheelchair that had come to push me to the car. McDonald’s french fries were calling my name, so on the way home, we stopped for a little treat. Probably not my best idea to eat on a totally empty stomach, but man, were they tasty! I paid for it with a sick feeling stomach later on!

Now, I’ve been home for four days. Honestly, the surgery wasn’t nearly as scary as I thought, and even staying quiet hasn’t been so bad. My voice is starting to return a little at a time. Right now, it sounds raspy and scratchy, but I imagine that the more I use it, the more it will improve. Through this whole experience, I have added another example to my book of life experiences to show that so many times, events that we think are super scary turn out to be no big deal. Life is definitely looking brighter from the OTHER side of this whole experience!