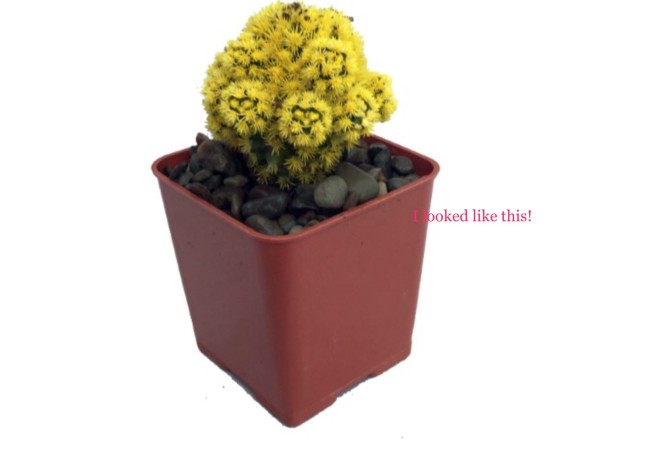 “Ha ha look at how small he is!” Snickered one flower.

“look at his color is he part dandelion!” Remarked another.

“No way is he a lion he’s to shy!” They all laughed in unison. The small yellow cactus sighed and just ignored them. “No wait, look at how cheep he is! Only one dollar!” The laughs from the four purple petunias shook the walls of the Kroger, making them feel like small knock of brand cookies.

As the towering purple flowers where taken to new homes the small cactus felt like what they said was true, but one night someone picked him up and moaned,

“only one dollar, imagin how fast it will die!” Then puts him down, his smile went from ear to ear went to to chin to chin. He sighed to him self as the speakers from above him boomed about how it’s was time for the store to close. The tiny cactus just sighed and whispered to himself Maybe tomarow.

The next day he woke up to a sweet voice calling for him, “hey, are you awake?” Said a small red tulip. The itty bitty flower nudged the pot until he woke up. The tulip asked for his name but he had no answer, he just sat there and thought until the tulip asked, “Tiny is a good name for you, do you like it?”

“I LOVE it!” Tiny said. With his new name he felt stronger than ever, so strong he felt powerful for once!

Later on, the two became best of friends! They whould look at all the people and talk about how luck they where to be taken. But one day the small red flower caught someone’s attention, they looked at the price shrugged and took her away

“noooooo!” Yelled Tiny. The red tulip said her good byes as Tiny starts to feel better. He knew that “he whould be taken one day someone nice and-” his thoughts where cut off. All of a sudden he felt a hand grab him and turn him on his side and and looked at his price tag and began to look excited,

“one dollar! What a steal!” Tiny felt happier than ever he knew that he had someone to love him.

Disclaimer: this story was about my yellow cactus from Kroger.

disclamer two: I whould have a picture of him but he died here recently, very sorry.