Bobby Goodspeed is a Misfit. 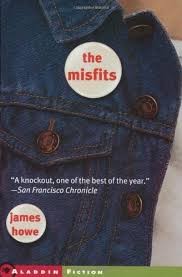 I have recently finished The Misfits, by James Howe. The Misfits is about a group of “outcasts” who are trying to make a change in their school. The main character, Bobby Goodspeed is part of a group called The Gang Of Five. The group consists of Bobby, Addie, Skeezie, and Joe. They all have been separately called names by the school’s main bully, Kevin Hennessy. Bobby is an interesting character, he is reserved and quiet most of the time but when he expresses himself more freely he can come across as confident and definitely influential. Bobby and his friends all decide that for them to make a difference they will have to get to the heart of all student power, student council. Addie knows she is too unpopular to run for President, so she convinces others to join her campaign. Oh, and did I mention Addie composed a whole separate political party called the Freedom Party? About that, Addie believes that minority students don’t have enough of a say in the school community. She believes that if she can accomplish winning VP she’ll make a change for minorities in her school.

My goal while reading The Misfits was to track the problems that occured in the book. I chose this as my goal because I could tell that to get to The Gangs goal they would have to encounter with quite a few problems along the journey. These problems help me understand how hard it is to attain a certain goal, which in this case, is to become Student Body President and Council.

Near the beginning of the book, Bobby had created a new political party, the No-Name Party, since the Freedom Party was cancelled by Mr. Kiley, the principal of Paintbrush Falls Middle School. A problem with this idea is that for the campaign to succeed they need a President to represent the Party. Addie, who usually looks for candidates, goes to DuShawn because he was running for President in their last campaign for the Freedom Party. After class Addie talks to DuShawn about President, Tonni is nearby to confront Addie. After Addie proposes the question Tonni drops in like an anvil on the conversation. She exclaims, “DuShawn is out” (pg. 143) this takes effect on DuShawn because he wants to tell his side of the story. Addie, DuShawn, and Tonni are all arguing about if DuShawn is in or out. DuShawn tells Addie that he doesn’t, “want to run on your fool ticket..” (pg. 144). This is interrupted by Ms. Wyman asking for a chat with Addie. This problem is resolved by Addie deciding that it’s her turn to be in the spotlight so she runs as President herself. As I was reading, I thought that the campaign will be better with Addie as President since she is so passionate and strong.

Towards the end of the book there is a problem about Addie’s presidential speech. Bobby and Addie are brainstorming some ideas for Addie’s election speech. She is having a very hard time getting the main focus across. Bobby however has written down some clever bullets on the subject. He shows her what he has written down and she is astonished. Addie tells Bobby that if she helps make the bullets into a speech, he will have to give it. Bobby is only the treasurer so this doesn’t make much sense, then again, a third political party does not either. Since  he is very shy and hates attention Bobby lets himself down by saying he can’t do it. Addie helps him realize that he is the one who created this wonderful campaign and he should be the one to get them to win the election. Bobby is a smart kid in hideaway, if he can create a third political party specifically for name-calling and pull off making a great speech, who knows how much he can do later in life.

The evidence that I have gathered has helped me realize that to feel good about your outcome is all that matters, win or lose. No matter how many problems The Gang crossed they kept on going, they moved forward until they couldn’t anymore. I don’t want to be a big spoiler, but they don’t get the result that they hoped and worked for but they still were happy to have given an awesome speech and help the school become a better environment. By reading this book I have learned to never give up on something if I really believe in it. Working hard to get a certain goal means struggling but regardless of end product you have to be proud of what you and others have done.