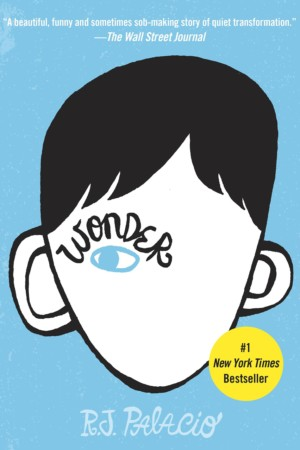 August (Auggie) Pullman was born with a severe facial difference that,up till now,has prevented him from going to the mainstream school.

Starting 5th grade at Beecher Prep, Auggie wants nothing more than to be treated as an ordinary kid—but his new classmates can’t get past his extraordinary face. Wonder begins from Auggie’s point of view, but soon switches to include the perspectives of his classmates, his sister, her boyfriend, and others. These voices converge to portray a community as it struggles with differences, and challenges readers, both young and old, to wonder about the true nature of empathy, compassion, acceptance, friendship, and—ultimately—kindness. Auggie is a hero for the ages, one who proves that you can’t blend in when you were born to stand out.

Wonder is the best book that I have ever read!

I like the book because you can kind of feel what Auggie feels when he is getting laughed at.There is one kid at  Auggie’s new school named Julian who makes fun of Auggie. For example, when Julian  is showing Auggie around the school he said   that this is a eraser and Auggie probably already knows what a eraser is.The principle of Auggie’s school  assigned 3 kids to show Auggie around the school and Julian was one of them.There was also a  Jack  Charlotte.They both are becoming friends with Auggie.They help him catch up in the class and they do not laugh at Auggie  or make fun of his face.That will start and develop a good friendship in th feature.Julian,on the other hand,has started a group that is against Auggie.So now there is a war between Auggies friends( Charlotte,Jack and Summer.)Jack had swortof bean beatrading Aggie, so now Aggie hangs out with Summer.His sister has had problems at her school too!But that is another story.

So,i think that kids should read  this book beafore they go into 5th grade.