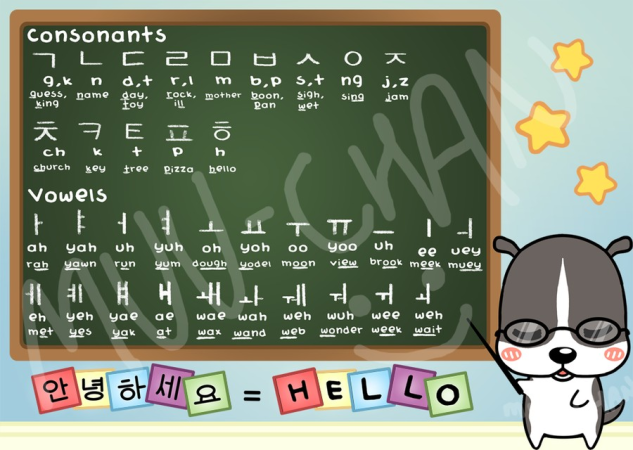 Learning new languages is a great way to not only build your resume, but it also helps you get more friends and allows you to communicate in various ways. I am fluent in Spanish and English, thus learning a new language seems like something within my reach. Although Korean may not seem like a language that would be easy to understand because I only know English and Spanish it has more similarities to Spanish than one would assume. Unlike other Asian languages like Chinese or Japanese Kanji where it’s a pictorial character, Korean uses an advanced system called Hangul where they have 5 base consonants and 3 base vowels that make a total of 24, for the sake of English speaker lets say letters, then you can combine them again into double consonants or vowels. There is a saying that “A smart person will learn the alphabet in an afternoon, and an idiot will learn it in a week.”

Hangul, the Korean language is based on phonetic sounds, unlike English where one letter can have multiple sounds such as Mickey being spelled phonetically as Miki or 미기, it’s written how it sounds much like Spanish. Just like how Spanish can help you understand multiple romance languages. Once you get the basics you’ll be able to sound out what it says although you may not know the actual meaning, 아가 steps you’ll get there. I even taught a group of kids between the ages of 5-11 the basic alphabet in an afternoon. I learned the basics now I will build upon what I’ve learned and I’ll study how to learn faster by reading books on children’s growth when learning a new language. I study by listening to music to help train my ear to keep up, I also watch a lot of dramas and write down words that are frequently said. I have recently started watching more variety shows with kids because they use a more basic vocabulary and do acrostic poems. I also study more Seoul standard dialect instead of other dialects so I don’t confuse myself. At first, I was scared I would have to learn different kinds of Korean but I realized that the differences are usually in the areas slang much like how Spanish in Mexico is different than that of Spain.

Now I will teach you how to write butterfly in Korean. The way you write and read is left to right, top to bottom and usually consonant vowel consonant vowel. The N sound is represented by ㄴ, the “A” sound in apple is represented by the 아 (here the ㅇ is a placeholder since we don’t have a consonant alone it would beㅏ ) the B/ P sound is ㅂ and the “ee” sound is represented by ㅣall together it would be 나비 pronounced Naa-bee. It is also a great song by the amazing Korean band BTS- Butterfly. I also listen to their music a lot since it has more complex meaning and really makes you think about how they use their words to have double meaning like in their song BTS- Baepsae.

Inspired by this IDEA WRITE YOUR OWN POST ABOUT THIS Read more from Ms. Erdmann's Class