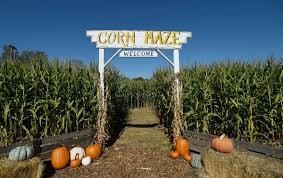 “Come on!” I said. “We have to complete the maze for a prize! Any of you know the way out?”

“Not me,” said Brandon. “How were we supposed to know anyway? This is the first time for all of us.”

“Maybe for you, but this is my second time,” Malachi said. The three of us and just entered a corn maze in order to get a big cash prize. We didn’t know how much it was but we knew we were going to split the money between the three of us.

“Let’s go left. I have a good feeling about it,” I said. We all agreed and went left. Next thing we know we are facing a dead end.

“Wow, this is definitely the right way Nathan. Let’s follow EVERYthing you say,” mocked Brandon.

”Don’t blame me okay, this is my first time. Besides, the poster never said it would be easy.”

”Yeah, well at least I wasn’t the one who lead us to a dead end!” Brandon complained

”Guys, seriously, you might wanna see this.” Malachi was obviously trying to get our attention. But Brandon and I were too busy arguing to hear him.

”GUYS! STOP ARGUING FOR ONE SECOND!!”

”What is it Malachi,” Brandon asked annoyed.

”Look!” Malachi pointed at a mysterious rock that was glowing bright blue. We all had no idea what kind of rock it was for we had never seen this before.

“Whoa, what do you guys think it is? It doesn’t look like a fossil or rock of any sorts, at least the color isn’t. So you guys have any ideas?” I asked. “It looks like it might be from another planet or something.”

“What, are you scared Brandon?” Malachi asked him with a joking tone in his voice. “Are you too CHICKEN?” Malachi and I began making chicken noises, mocking Brandon.

“No, I’m not scared. I just want to see who’s tough enough to do it. I guess neither of you are. Such a shame.”

“What are you talking about? I’ll do it in an instant. Watch, I’ll do it right now.” Malachi picked up the rock. To our surprise nothing happened at first. Then it began to glow brighter so Malachi threw it back down. “Whoa. What… just happened?”

“I’m not exactly sure. Here, let me pick it up,” I said, honestly kind of nervous to what this would, do if anything. It did the same thing again, but this time it made weird noises. It was the kind of noises you would hear in an alien movie or from a UFO. I didn’t know what was happening but I kept hold of it. It started spinning in my hands and before I could drop it, it created a portal that sucked us in and took us somewhere.

“Whoa, where are we? We must be on some sort of alien planet. I told you it was a rock from another planet,” I said. We were all astonished by what we were witnessing.

“This is cool. But now that brings up some questions. Where are we in the universe and how did that rock actually take us here?” Brandon asked. “This is ridiculous, cool, but ridiculous.”

“Good idea, I’ll head North, you go towards that cave, and Brandon will go over South,” I said. “We’ll meet up back here.” They both nodded. We all went our separate ways to find stuff. All I could hope is that we did find stuff and that we didn’t get lost or worse.

I found and saw lots of cool stuff, like all the vegetation on this planet. It was the coolest thing I had ever seen. I decided to grab some of it in case it helped us later. When I grabbed some, the auroma was amazing. It smelled like nothing before. I couldn’t possibly describe it even if I wanted to. All I can say is that it was the best smell in the world.

After about 30 min or so, I decided to head back in case they were back at the rendezvous. When I got back they weren’t there. I waited a while for them to come back. After about 10 min, they were back. I was starting to get kind of worried, but I just put it in the back of my mind.

“So what did guys find?” I asked. Malachi was the first to respond.

“In that cave I found a bunch more of that rock we found. I figured that if they got us here then they can take us back, so I grabbed a few of them.”

“Alright, that’s really good. I found some of the planets vegetation, and it looks and smells amazing! I also grabbed some in case it helps later. How about you Brandon?”

“Well, that’s the thing,” he said kind of worried, maybe even sorry. “It wasn’t something I found. It was more like a civilization I found. One of the aliens saw me and-” he was cut off by a strange voice we had never heard before.

“Hello earthlings,” it said, “I see that you are in quite the trouble here. I followed your friend here and heard you needed help getting back home. I can help with that.” We all turned and saw an alien standing right behind Brandon.

“What the heck! Where did you come from?!” I exclaimed. “And how didn’t we see you before?”

“I am one of the natives on this planet. My kind has lived here for many years. We have adapted  based on the environment as most species do.”

“Okay, I don’t know what’s going on here, but this is really cool,” Malachi said. “Wait! I just had an idea. Maybe you can help us get back to our planet right where we were.”

“Maybe, I have made teleporters before, but never made one for your species to use. But I’m sure I can make one you will survive. I will need some of the rocks that brought you here from that cave.”
“I have some! I knew they would help. Is this enough?” Malachi said proudly.

“Almost, but I will need a few more. Do you mind going back into the cave and getting more? They are a key part I need.”

“I am sure that it won’t be too hard to do, as long as we don’t get lost,” I said. “Let’s go and get more.” With that we all left and went to the cave. As soon as we walked in we found a plethora of the rocks.

“Wow, alright I’ll head down farther in the cave to get more,” Brandon said. “I bet there will be other cool stuff too.”

“How bout we all stick together. We don’t know what dangers could be in this cave,” I said. “If we get into danger we will help each other out.” As we went farther in the cave we began hearing weird noises. It was almost as if something in here was sleeping or watching us.

“Man am I the only one who feels like they are being watched,” Brandon said. He was right it did feel that way.

As soon as he said that a giant monster dropped down in front of us. We all screamed and began running back.

“Wait! We still need to get more rocks!” Malachi reminded us.

“How are we supposed to get them with this thing running after us! Who knows what it will do to us!” Brandon said.
“I have an idea! How about one of us distracts it as the other two get some rocks,” I said. We all agreed and ran off in different directions. “Hey ugly! Over here!” I yelled at the monster trying to get it’s attention, and sure enough it looked over in my direction and began going after me. I ran away and I ran I saw Brandon and Malachi getting a ton of the rocks. All I could hope was that they could get enough before the monster got bored of chasing me and went for them. The monster started to catch up with me so I started running faster, but no matter how fast I ran it seemed to go faster.

“Hey! Over here you dumb monster thing!” I heard. The monster stopped chasing me and turned around. I did the same and saw Brandon helping me out with distracting it. “We got enough rocks Nathan! It’s time to go!” Malachi gave me a thumbs up.

“Alright! We better go fast though because this thing is really fast.” We all began running for the cave entrance as the monster chased us out. It almost got us just as we got out of the cave. It roared at us and went back.

“Dang, *huff* *huff*, that was close. Malachi! Did you know that thing was in there!?” Brandon asked, very out of breath.
“Look I had no idea okay. The important thing is that we got what we needed,” Malachi responded, also out of breath but not showing it.

“Malachi’s right. We got what we needed, and we don’t need to go back in there. Now, where is that alien?” I said. At the moment I wanted to just get out of here and get back home.

“I am right here, and I see you have what I needed,” we heard. We turned around and the alien was standing right there. “Would you mind handing them over so I may get to work?”

“Here you go. So how long will this take. Not long right?”

“It shouldn’t take long. Although it may be a little longer than you like. I am very good at this though.” Next thing we know there is a giant pad and machine in front of us. We had no idea that he would be this fast. “I am nearly finished. I do need a sample of you DNA though. Do you mind?”
“As long as it will get us home, then i don’t mind,” Brandon said with stress. “What do you need, a hair? Blood sample?”

“Hair will do.” Brandon pulled a strand of his hair and gave to the alien. The alien then put into a little slot and the machine powered on. “It is now done. All you need to do is stand on that platform and I will activate it.”

“Alright. I will kind of miss this place though,” Malachi said.

“All right, are we all ready?” I asked everyone. I could tell that we all wanted to stay a little longer, but we also knew that this was the right choice.

“Ready when you are,” the two responded.

“Wait, there still has been one thing on my mind that I haven’t gotten to ask our new alien friend here, how exactly did that rock we found land on our planet? I can’t be the only one wondering this can I.”

“Well, you see, my kind has been observing your planet for many eons. We had no intention of domination or conquering your planet and people, we just wanted to know more about it. So we sent multiple, as you call us, aliens to examine your planet report on what they saw. You’re species of humans is quite astonishing,” he said, “Also, one more thing, if you three ever wish to come back and visit, take another rock. This will allow you to come back again.”

“Thank you, we will be sure to come back and visit again,” Brandon said with pride.

“Well, I guess we better get going then, see you later alien friend,” I said. We all stepped onto the platform. As we began to leave we all left a tingling sensation. At that moment were all teleported back to the corn maze.

“It seems like no time has passed. So, you guys still want to go for that prize?” I asked. We all looked at each other, nodded, and ran off.