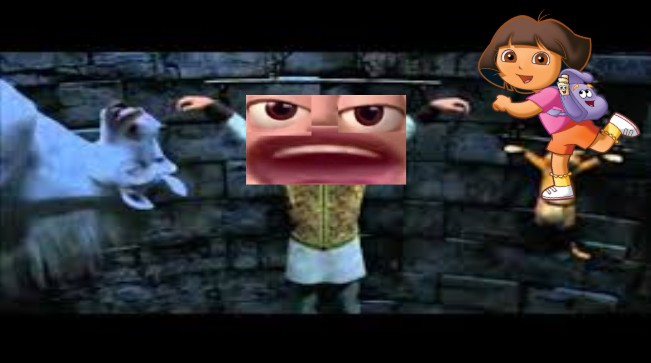 GO READ THE EARLIER STORIES BEFORE THIS ONE YOU PEASANTS!!! (Also, I hope you like the rhymes B.T.W.)

Stingy, now in jail, feeling like a failure, freaking out, panting, and getting scarier. Then, out of nowhere, a magic dolphin poofed into the cell. “I SHALL HAVE YEE RESCUED MUH DOOD! IT SHALL ALL END WELL!!!!” That is what it said, it screamed with a shout. Once Stingy heard this, he no longer had doubt. “Reach in your pocket, and you shall see, a magic tele to call for thee.” Stingy ran and pranced, and did a little dance. He reached in his pocket, and into his pants. He pulled out a phone, so full of wonder. A bunch of “How to” story contacts, from stories down under. “Which one shall I pick.” He looked and he froze. He saw a cartoon Dora, that could possibly explode. He screamed and he gasped, then he shouted out “I’m free! This horrible place, it’s just not for me.” He pressed the green phone button, and the phone began to ring. Then he looked out the window to see a weird cartoon thing. It was Dora the Exploder, Stingy began to scream. I might not be screwed, as screwed as it seems. Then Dora Exploded, right at the gate. Stingy had exploded, and it sealed his fate. “FINALLY END OF THIS STUPID SERIES!!!” Dominic writing this story said! This is the final Möth story, this series is finally dead. (Or so you guys would think…)