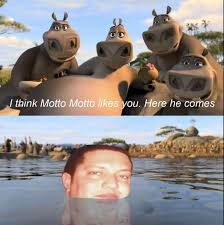 READ ALL OF DE OTHER STORIES BEFORE THIS ONE U PEASANTS!!!

Stingy, back in his lair, got crippling depression after his Christian Veggie bois got eaten by some evil Vegans. He still had T-Series at the base, who was also mourning the loss of the veggies, but not for the same reason as Stingy. Totally honest, he was going to turn them into salsa when they got back, but he missed his opportunity because of the Vegan Army. Now, T-Series and Stingy were more furious than they have been in every other Möth Adventure story. They had to get back at PewDiePie for everything he has done to them. Killed their friends, blew up their main non-secret base, and teamed up with Logan Paul, Mr. Beast, and JackSepticeye to end T-Series once and for all. Time to make another plan, with another person…

Stingy and T-Series hopped onto the Fortnite plane and flew to Madagascar, Africa to find a long time friend of Stingy, Moto Moto. He is the smexiest Hippo in the entire world, with monstrous pecks, massive arms, and hunky legs. He is the dream Hippo. Maybe, since he is now a popular meme, they could get PewDiePie to be distracted and make a meme review about him, so Stingy and T-Series have plenty of time to infiltrate the castle. They landed at the Madagascar airport, stole a golf cart, and went off to Moto Moto pond.

They arrived to a weird scene with a song saying “Big and Chunky” playing as Moto Moto walked up to a pretty Hippo to ask her out. Very odd, if I do say so myself.

Stingy told him everything, and their plan to take back the island.

They all hopped on the plane and flew back to the secret Stingy base.

They landed, closed the secret base door, and got ready to leave again for another flight to the main part of town to defeat PewDiePie once and for all. They hopped in the plane and took off. They flew and landed right into town. Moto Moto walked in to distract PewDiePie with his gorgeous looks, and over all beauty! He walked in, and got escorted right to PewDiePie for the soonest meme review episode. While he was in the filming room, Stingy and T-Series walked right behind them, and snuck around to where PewDiePie was filming. Then, the time was right. They hopped right onto PewDiePie’s back and started their attack. All of the sudden, Moto Moto turned on them. He started saying that he always wanted a meme review, but had no way to get to PewDiePie’s filming studio. In the end, they defeated PewDiePie and Moto Moto and kicked them out of the place and threw both of them in the jail cells again… to be continued…

Also, in the making…

Also, comment if the smexy hippo’s name is Moto Moto or Motto Motto!