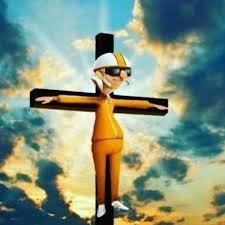 I don’t think I need to say it anymore, but GO READ THE OTHER POSTS BEFORE THIS ONE YOU PEASANTS!!!

PewDiePie and Moto Moto were sitting in the recently redone Jail cell that is indestructible, unless it’s power source is terminated. The power source is unknown, but the force field around the place is orange if that helps at all. Either way, they needed a way to get out.

On the throne, Stingy sat making new rules for the island with the help of the now dominate T-Series. For example, everything is Stingy’s. Your mailbox, your triagonal sign, any blue balloons, the month of June, and everything else. This would affect the lives of everyone from this day forward. The towns people got word of this throne take over and got mad, madder than what they thought could be possible. They literally started burning to red hot coals! Chök was at home watching Bikini Bottom News when he saw the story. He walked up, turned off the T.V, and walked right to the jail.

He got to the prison door, knocked, and he was rudely told hello by the anchovy worker on guard. He kicked the worker in the tail fin, grabbed the keys, and ran to the jail cell to release his friends. When he got there, he realized none of the keys worked for the jail cell. The only way he was going to get into the lock to open it is with a…. shrink ray…     He ran out of the prison, dropped the keys next to the worker, and ran to Vectors house. Vector was a weird dude with a big, white house that has sharks under the living room. This is the famous spot where Vector rubbed his hiney on a keyboard and shot Gru with lasers. Chök knocked on the front door, and was let right in by a robot maid-thing. He was red right to the living room where he saw the GOD VECTOR!!! HE WAS MAJESTIC! He was playing on his Wii and eating popcorn while wearing a squirrel suit for some apparent reason.

“All mighty god, Vector. PewDiePie and Moto Moto are stuck in prison and I need to borrow your shrink ray to save them.” said Chök.

“NO!! Only I can use it. I can come with you then, but otherwise, NOOOO!!!!!” yelled Vector with anger. “Only a man with Magnitude and Direction can use it!”

They ran to the jail, again. The anchovy was still knocked out, so they walked right in, shrunk Chök, and he crawled into the key hole. He pushed a couple pins, and the door unlocked in a jiffy. They were free at last! Vector started dancing as a celebration, and Chök started to turn back to normal size. They all started dancing. Moto Moto and PewDiePie too! Then, out of nowhere, came Stingy’s army of dead memes right to the prison entrance…