The Tuareg people are about 2 million nomadic people who live across the Sahara Desert, including in the North African countries of Mali, Niger, Libya, Algeria and Chad. The Tuaregs are part of the Berber group of people, and they are largely Muslim. Much of Tuareg art is in the form of jewelry, leather and metal saddle decorations, and finely crafted swords. Each compound is named for the married woman who owns the tent. She may make her husband leave the tent if she divorces him.Traditionally, the Tuareg have married within their own social category, preferably to a close cousin. 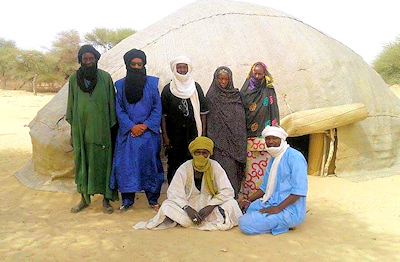 The veil that Tuareg men wear on their faces has several meanings. It is, first of all, a symbol of male identity. It is also thought to protect the wearer from evil spirits. In addition, it is considered an attractive adornment and can be worn in various styles. The face veil is worn differently in different social situations. It is worn highest (covering the nose and mouth) to express respect in the presence of chiefs, older persons, and in-laws.Once they marry, Tuareg women wear a head scarf that covers their hair. In rural areas, Tuareg men wear long Islamic robes. Women wear wraparound skirts and embroidered blouses. In the towns, clothing is more varied. It includes West African tie-dyed cottons, and also fashionable European styles for some wealthier people.