Why Christmas Music Should NOT EXIST!!!!! 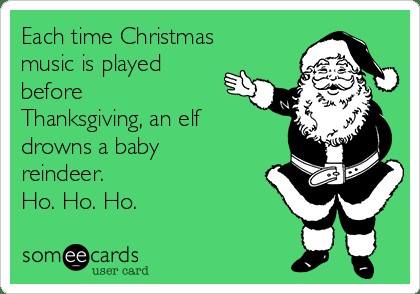 I’m sorry for being your “Debbie Downer” for the year, but I think this is a very good time to ruin the awful, painful music known as Christmas music. Some people may say “It gets me happy and ready for the season.” All I can say to that is a simple no. But, if you want justification, here you go! Why Christmas music shouldn’t exist, and maybe even banned.

First of all, it is, believe it or not, bad for your health! As said in “The Independent,” “People working in the shops at Christmas have to tune out Christmas music because if they don’t, it really does stop you from being able to focus on anything else.” In other words, it is not good for any working environment. It does say it makes customers happier, but the people doing the grunt work at the establishment are probably cowering in fear when that one worker pulls out his iPod and smirks. Also, another report by business insider says that it can “reinforce your stress instead of relieving it.” Is that what you want to subject people to?

Also, there is a song called Dominick the Donkey, which sounds a heck of a lot like my name, doesn’t it…. yeah. All the time my friends just kept singing Dominick the Donkey just because they know it gets on my nerves. Either I need new friends, or this stupid, horrid, song to be banned from Earth IMMEDIATELY!!!! Also, it shames all Dominics and Dominicks out there, and it probably causes them the same pain. DO YOU WANT US TO GO THROUGH PAIN?? IMAGINE BEING IN OUR SHOES!!!  DO I NEED TO SAY ANY MORE??? WELL, I WILL!!!

Finally, it is just flat out repetitive. I mean, i’ll be brutally honest, all music nowadays is repetitive, but Christmas music takes it up a notch. For example, “Here comes Santa Claus” by Gene Autry is the most repetitive song out there. It is just here comes Santa Claus repeated over and over again. Even the verses are almost the exact same! It might as well just have verse 1 on repeat the entirety of the song. If it did, it almost wouldn’t make any difference to the way the song is now, and you wouldn’t even notice the difference! “Oh that’s just one” is what you might be saying to yourself right now. Your wrong, and i’m going to prove it by letting off my steam on another song, and it’s known as Jingle Bells. This lyrical disaster just is the same verse, over, and over, and over again. Can you debate that fact?

In conclusion to my rant, we should BAN all forms of Christmas music from existence, just like we should ban the entire beauty community on YouTube! Thanks for your time people. A Change.org post might be coming soon. Stay tuned.